What is Ulo? An Owl Security Camera…

Ulo is an interactive owl security camera….. Say what?  Yep…It is an interactive security camera in the form of a cute owl- that has become an internet darling.  The cute, almost cuddly creation of Vivien Muller was launched in a Kickstarter program  in 2015.  The campaign was driven by 8,330 backers who pledged €1,618,869 to help bring this project to life.

Nevertheless, the Ulo security camera has yet to actually hit the market-raising a lot of eyebrows. Many disgruntled backers are beginning to question the legitimacy of the company and starting what could turn into an avalanche of refund requests.

So is Ulo a legitimate interactive security camera …or a cute internet security cam scam?

After about 2 years of delays, the Ulo is finally being shipped. While we have not tested the product hands-on, as we have done with other video cameras, we have done an initial review based on extensive research and customer feedback. If you have hands-on experience with the Ulo owl security camera, we would encourage you to leave feedback and a formal rating below.

Be the first to leave a review.

Your browser does not support images upload. Please choose a modern one

The brainchild of Vivien Muller, Ulo clearly is NOT a case of form following function.  This product is all about form…but, that is what makes it so unique. With the Ulo, Muller combines his creative, avant-garde artistic abilities with modern technology that performs valuable security functions.

Muller is also responsible for bringing such unique products to market as: 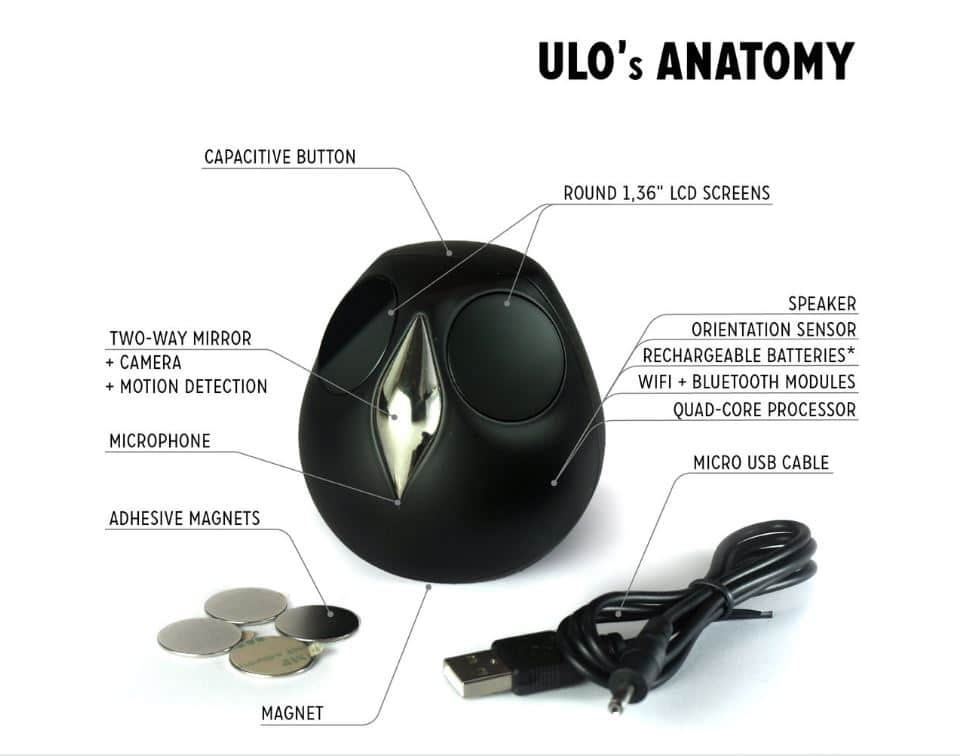 Even the base on this camera is interesting.  You can mount it is easily virtually anywhere with adhesive magnets. There is a Neodymium magnet located in the base which swivels on a diagonal plane. This enables you to place it on a shelf or table- as well as mount it on a wall. The body houses an orientation sensor to maintain the proper camera perspective.

The magnetic mounting system allows one to easily move the unit to other spots in the home where one of the four included magnetic mounts is located.

Ulo comes only in black and is made of 100% recyclable ABS plastic.  At the top of the head , a capacitive button is located which is the primary means of activation. The speaker and USB charging ports are located on the back of the unit.

The beak is actually a 2-way mirror which houses the camera and motion sensor.  It rests just above the microphone – which enables the Ulo to be controlled via voice control.

It is said that “the eyes are the mirrors of the soul”.  While it may not have a soul, its eyes have the ability to communicate a wide variety of expressions.  The eyes are made of miniature 16mm round LCD screens-which were originally used for smartwatches. It is these screens that give Ulo its character and personality.

Ulo can express a variety of emotions such as: 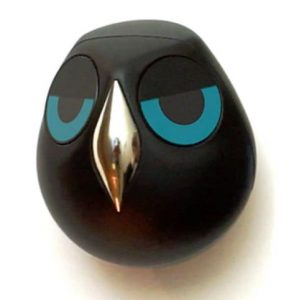 The eyes even let you know when the camera performs certain functions:

While it’s strong on the form factor- they haven’t forgotten function…at least in theory.  While there was certainly a lot of good intentions…ultimately the final product was unable to deliver on some of the promises….unlike one of our favorites– at less than half the cost!

And, if you are looking for a real deal on a security camera that interfaces seamlessly with a complete home security system…one of our top picks is offering an unbeatable deal on an HD video camera for just $19.99 when you sign up!

Ok…tit has a unique design and a character and personality all its own…but, how does it stack up as a real security camera?  Can it be integrated into today’s “smart home” as part of a comprehensive home automation system?

How does ULO compare with a security camera synced through Alarm.com?

Following are some security camera features and specifications:

That is a long laundry list of specs and features…and if they deliver on those promises, it will certainly compare favorably with some of the more popular security cameras in the marketplace.

First, let’s take a look at some of the areas where Ulo managed to meet or exceed original expectations.

It is also enhanced with more animations and a removable battery.

Now let’s take a look at the areas in which this Owl Security Camera failed to deliver (so far):

While the Ulo Owl Security Camera was originally slated to be delivered with Li-Ion batteries, it was redesigned to accomodate 3 rechargeable 1900 mA NimH batteries.

These batteries are not provided…but are readily available. They do not need to be removed to charge. They will recharde when the Ulo is plugged back in.

At full charge, the batteries will last about 48 hours in standby mode…and can live-stream for about 4 hours.

The Ulo owl security camera will indicate a low battery at 10% through the “tired” eye expression.

In addition,it still does not have 2-way voice capability- a feature originally offered that is becoming almost standard on quality home cameras at less than half the cost of the Ulo.

The Ulo is controlled locally by the capacitive touch button on the top of its “head”. Tap once to turn the unit on or off…twice to put in “Alert” mode.   In Alert mode, the animated eyes are powered down and the camera monitors motion and sends GIF images to your e-mail or drop box.  A limited amount of data is stored in user accessible SD storage. 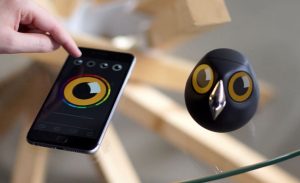 Ulo customers are reporting many issues with advanced features that are integrating seamlessly through the recently reviewed Alarm.com App. 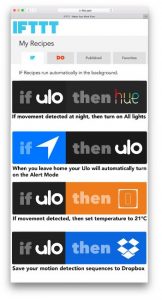 Ulo can even be set up to perform functions using the popular IFTTT platform. IFTTT stands for ” If This Then That”  So-called recipes can be set up in which “This” -the trigger, sets up “That”-a predefined resulting action.

The device is IFTTT compatible…and consequently can interact with other IFTTT devices on the platform.  Thus, if the camera detects motion…it can trigger other connected devices – such as turning on lights.

If motion is detected, Ulo can send an image to your e-mail.

Similar to geo-fencing with Alarm.com, it can also be set up to sense the presence of your cell phone and automatically switch to Alert mode when you leave the home. (Ulo reviews indicate that customers are having a number of issues with these features in the field)

An Owl Security Camera with Voice Control and Facial Recognition.

As the Kickstarter campaign achieved financial milestones, they added additional features and functionality to the Ulo project.

This is something of a double-edged sword…as it typically also results in cost overruns and delays in bringing the product to market. While the unit is projected to respond to simple voice command and includes facial recognition, the effectiveness of these technologies in previous security cameras has not always been stellar.

The development team has had to scale back expectations a number of times…and will likely have to do so with some of these advanced technologies. These features have been found to put excessive power loads on the batteries-so will only be available when the Ulo is being powered by the USB connection.

Similar technology has often proven to be problematic and less than reliable in other products…so it remains to be seen whether the Ulo development team can find the right combination.

If you are looking for more advanced features and functionalities…check out our Alarm.com review.

Often times features promised for reaching “stretch goals” in Kickstarter campaigns prove to be more costly or problematic than originally anticipated. One of the relatively early milestones was the implementation of waterproofing the camera housing so that it could be used for outdoor applications.

Ultimately, these plans had to be scrapped.  Likely because it could become too costly or further delay a timeline that has already become much longer than anticipated.

So how much is the Ulo Owl Security Camera?

While the camera was originally offered to Kickstarter backers at 99€, the Kickstarter funding campaign is closed.

If it performed as originally promised, there are some who might appreciate the novelty and form factor, but based on the tone of most Ulo reviews, its performance as a serious video security camera is questionable.

Looking for an unbeatable deal on an HD camera?

Ulo Camera Reviews got you worried?

That’s right…Protect America is offering an indoor HD video camera that gives you a ton of the features listed above…for just $19.99!

Learn more about Protect America in our comprehensive review!

Summary –  investing in this Owl Surveillance Camera is risky.

Ulo was designed to be a legitimate security camera with a very unique form and feature set.  They have finally delivered on the unique form factor…but, performance is questionable.

It will appeal to a certain group of security conscious individuals that are looking for technology that stands out and reflects their individual taste and personality.

That said, there are many disgruntled backers who are becoming increasingly impatient with the delays in bringing this product to market.  The campaign started in 2015 and was scheduled for initial product delivers to begin in the fall of 2016.  That timeline has now been twice postponed and is now slated for June 2017.

[Sept. 28 Update] Well… June has come and gone. Complaints from backers continue to mount.  For those who just want to be the first to (hopefully) have this unique home security camera, perhaps that is not a problem.

However, if you are looking for a security camera to protect your home…there are many other options available, now.  The Zmodo pivot is a very cost-effective option.

As noted in our SimpliSafe reviews, it is not uncommon for home security tech rollouts to be delayed.

Delays are even more likely in the world of speculative product launches such as Kickstarter.  And it does not mean the product won’t come to market…eventually. However, there are many inherent risks involved in backing Kickstarter and similar projects.

But will the product deliver on expectations?

Or, even make it to market at all?

Many invest for the thrill of being involved on the ground floor of exciting new technology.  And that is fine.  This is a cool product…with very little money really at stake. Have fun with it…keep checking the updates- and you will likely be one of the first to own an Owl Security Camera.

What can you expect?

Well…it is as cute as promised-but, Ulo Reviews indicate an overwhelming sense of disappointment.  Perhaps slicker packaging and better communication of a timeline for updates might help ease the pain of missing features and shipping delays.

This video “unboxing” gives you an idea what to expect when the Ulo arrives.

Based on our customer Ulo reviews, if you are looking to protect your home and family…perhaps you should be looking at proven technology that provides real peace of mind…today.  Check out our top security companies of 2018.

Thank you for visiting.  Please feel free to share and leave your comments on  Ulo – Owl Security Cam or Scam? , below or leave a detailed Ulo Review here.

Last Updated on March 31, 2020 by The Home Security Advisor