Although we haven’t done any Zmodo Pivot camera reviews on any of the other Zmodo surveillance cameras, their latest introduction in DIY wireless security cameras, the  Zmodo Pivot Security Camera is so exceptional, it warrants consideration as an addition to almost any home security system. It offers 360 degrees of 1080p high definition, full-color viewing- in a gorgeous motion-activated package.  Like most wireless IP cameras, it has an interactive app that enables you to control and observe the camera remotely while notifying you of new activity.

But this tiny technological wonder does a whole lot more than just take static high def pics and video. Equipped with integrated motion sensors, the Pivot will automatically sense movement and rotate up to 360 degrees to take a snapshot or video of movement within its field of view.  And it functions day or night with infra-red “night vision” that provides round-the-clock visibility even in low or no light conditions up to 32 feet.

And Pivot is thrifty-saving you time and money. When centrally located, the all-in-one Zmodo Pivot eliminates the need of having to install motion detectors, infra-red sensors, and multiple cameras to cover different viewing angles.

As if that weren’t enough, the Pivot also serves as a self-contained wireless home security hub that will keep you connected with your home and family and monitor the environment as well. It can interface with wireless door and window sensors- monitoring opening and closings and send notifications via the free Zmodo SmartLink App. It even has the ability to connect with other smart home automation sensors and has a built-in sensor that monitors the temperature and humidity of your home.

Or Part of a Comprehensive Monitored System

The Pivot can stand alone, or serve as an outstanding addition to a monitored home security system.  Let’s face it…. self-monitored camera systems have limitations. In the event of an emergency, most folks will sleep better knowing their home is being monitored 24/7 by trained professionals.

While it does require a separate user interface, The Zmodo Pivot is an exceptional value and would greatly augment a home security system from companies such as:

The pivot even has a built-in Bluetooth speaker and  2-way voice capability.  This lets you connect to and play your favorite music and also allows you to listen in and communicate with your family remotely through the included Zmodo SmartLink iOS or Android app.

While most security cameras require either a cloud storage subscription, for web-hosted storage, or a separate local DVR to store video footage, the Zmodo Pivot gives you the best of both worlds. It comes with 16 GB of internal storage (up to 48 hours of 24/7 footage).  For those who want the added security of offsite storage, (after all, one could just walk off with the camera….storage and all. Zmodo will also be introducing a cloud-based solution.

Summary, Specs and Availability of the ZModo Security Camera

Zmodo may not be a household name…yet.  I first came across them in 2010 when I was looking for a cost-effective conventional camera system, for a small business. I was amazed at the value of the system…but, was even more pleased with the US-based customer service.  Zmodo has sold over 6 million cameras since its inception in 2009 and offers outstanding sales and support through its offices in Fremont, CA, and Champaign, IL. 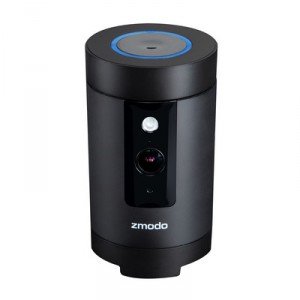 The Zmodo Pivot promises to raise the bar in the wireless ip home security camera and automation market segment.  While pricing has yet to be finalized, it appears that the Pivot will be offered between $199.95-249.95.

This is an outstanding value for an autonomous wireless security camera with this feature set. It appears to be similar to the Angee,  without some of the frivolous (and perhaps “fussy”) bells and whistles-at roughly half the price.

The Pivot is a 360° robotic camera, with security and home automation capabilities,  that will likely come in at or below traditional fixed wireless ip camera offerings from the likes of Canary, iSmartAlarm, and Piper Home Security.

Thank you for visiting.  For a detailed, in-depth review, please visit our Zmodo Pivot Hands-On Review.

Please feel free to leave comments or feedback on the Zmodo Pivot Security Camera, below.  If you would like to get our Home Security Guide, our latest updates, make sure you join our community by signing up for our newsletter.

Last Updated on December 12, 2021 by The Home Security Advisor