Zmodo Pivot Camera Review of the Pivot and Zmodo App

The Zmodo Pivot is looking to raise the bar when it comes to wireless IP cameras and video surveillance.

In my original Zmodo review, I was so excited about the prospect of a quality, sub $200, 1080P high definition camera with 360° of rotation, that I had to get my hands on one to see if it could live up to the hype.

While it isn’t designed to replace a comprehensive  security or home automation solution….in my opinion, Zmodo has hit the ball out of the park in designing a cost effective, plug’n play,  high def, 360° motion driven rotational  IP video camera- with some neat extras.

Hopefully, this Zmodo hands on review will answer most of your questions and give you the information you need to make an informed purchase decision.

Is this Zmodo Security Camera a Category Killer?

At the time the first article was written…there was a question as to what the price point would be. I thought to myself….

Could they really stuff all those features into a quality package and keep it under $249?

It would be a good value at $249….but, if it lives up to the advanced billing…the Pivot is a Slam Dunk at its current price on Amazon!

How would it come packaged?

Would it be easy to set up?

Would it function properly?

How well would the video translate?

How well would the app perform?

Well….brochures and spec sheets are one thing….how a device performs under real world conditions in the field is another. So let’s get started. 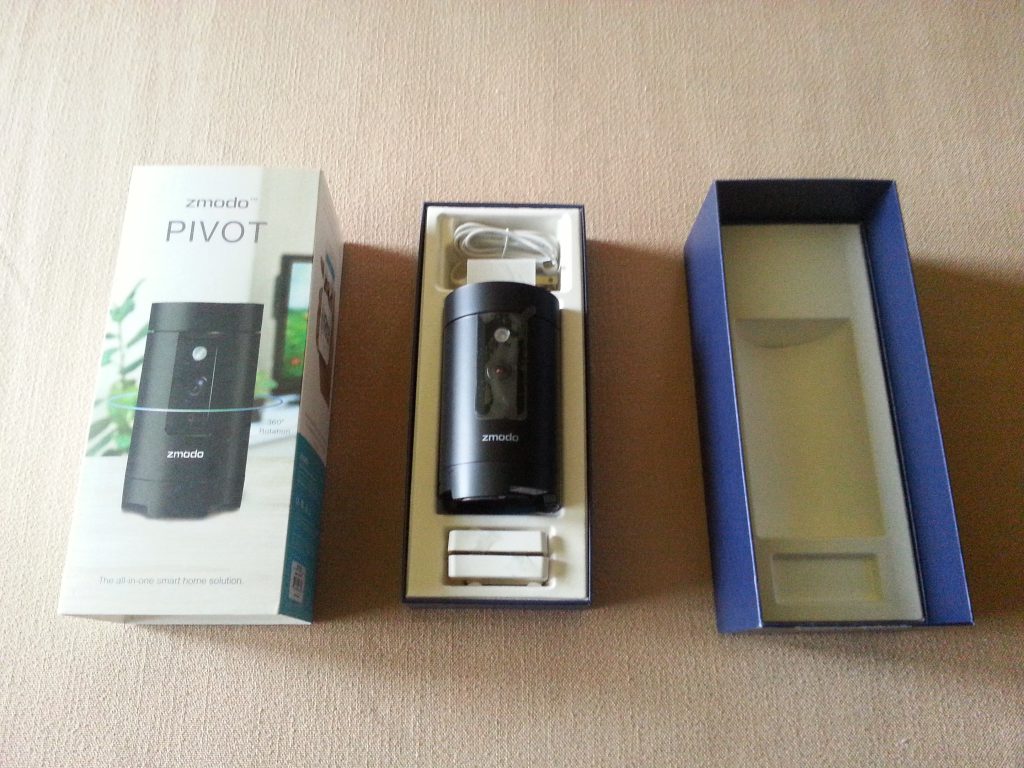 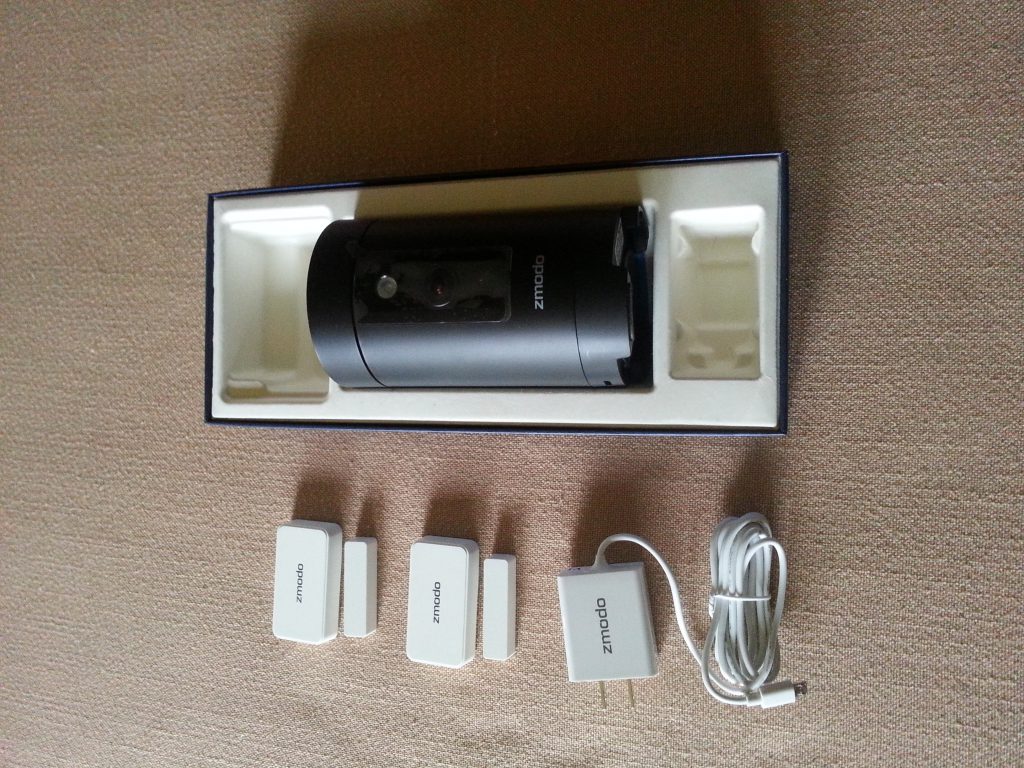 The unit is compact, and attractive-with a matte black finish that resists fingerprints and an iridescent blue status ring bordering the “touch pad” on the top.  The door window sensors are off white and smaller than most standard alarm sensors.

They have an adhesive double stick backing that enables flush mounting…although you may want to consider using commercial 3m adhesive if you find sensors don’t stay securely after a period of time.

Overall…the equipment is well packaged and has a nice finished quality.

Setting Up the Zmodo Security Camera

The Zmodo is one of the easiest wireless IP cameras to set up that I have seen.  To get started you will need to position the Pivot within range of your 2.4GHz WPA/WPA2 WiFi Router.  You will also need to connect to your network with either an Android or IOS mobile device…and download the Zmodo app from either Google Play or the App Store.

Once you have downloaded the app, set up your free Zmodo Camera account by providing an e-mail address and setting up your password.

Launch the app…and it will walk you through the steps… 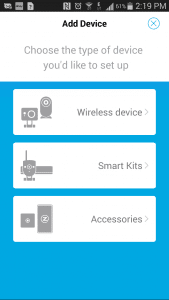 Power up the Pivot…once the status bar is blinking green…it is ready for set up..

Press the check mark to initiate the syncing process….you will be required to type in your network password….

And once the pivot has been enrolled on the network…You will be asked to name it and provide a security password.

Once this is completed a tile and access to the live feed will appear on the app’s home screen…and you will have the option of sharing the feed, if you wish to.  (this can be done later, as well) 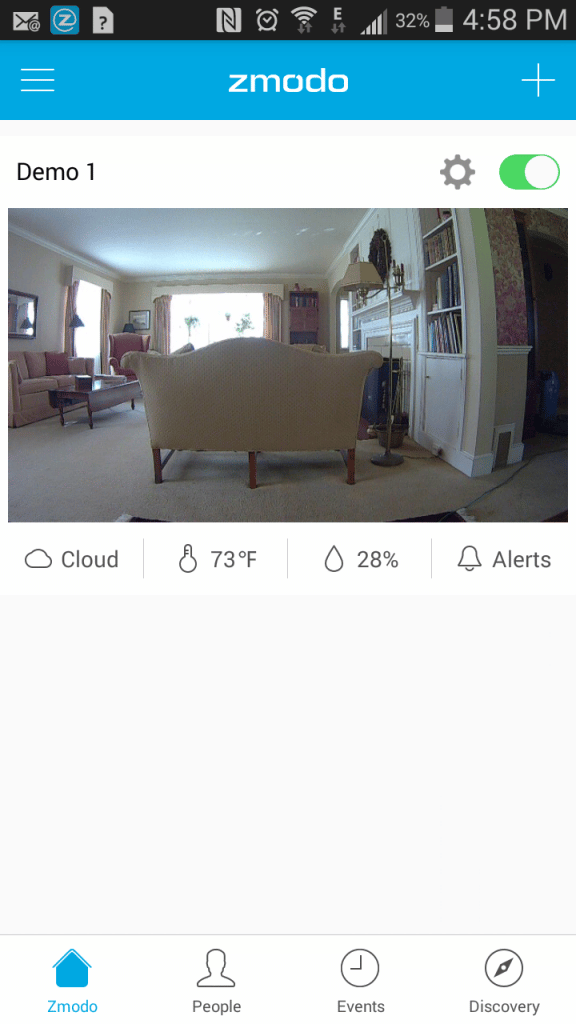 The entire process is almost automatic…and takes less than 5 minutes.

You can get the full user manual here.

The Touch Pad at the top engages Bluetooth connection and configuration functionality.  The status ring that surrounds it remains a cool steady  blue when the Pivot is connected and serves as a status indicator with steady and blinking green and blue states to indicate various connection scenarios. 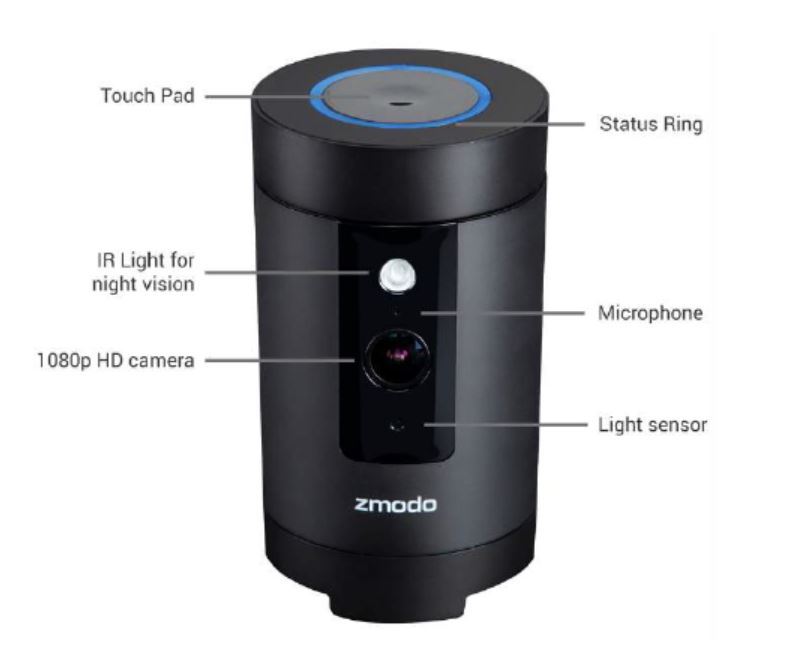 There is an IR sensor which does a very good job illuminating a 30’ area just below the pivot point around which the camera pans- a full 355 degrees. The 1080p High Definition camera provides a 135°panoramic field of view, through a 2.1 mm lens, with minimal distortion.

The lens is abutted by a microphone which picks up audio, allowing for “listen in” or 2 way communication…and a light sensor which activates the IR “night vision” in low light situations. 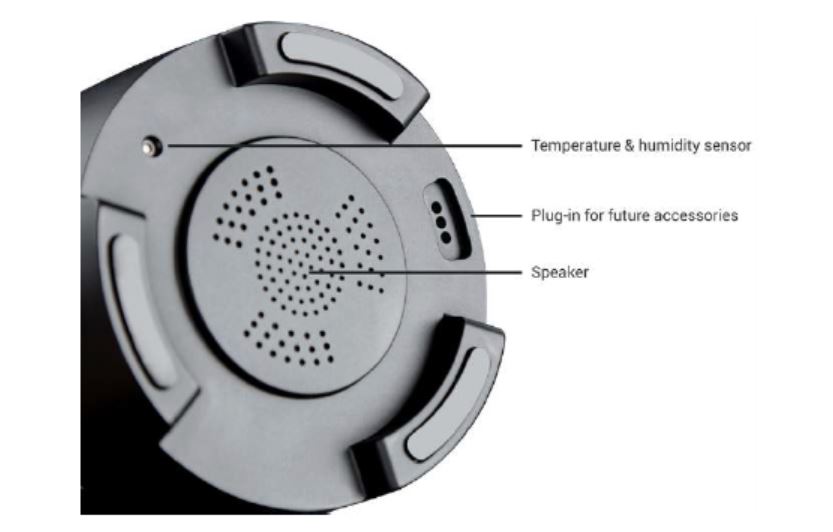 The speaker is located on the bottom of the unit- as are the temperature and humidity sensor and a plug in for a battery add on which will be available in the future.

Two door/window sensors are also included-which are fairly compact and are easily mounted with the attached adhesive.

Once you launch the Zmodo App, just swipe left and it brings you to the main page where you will find a tile with the current room temperature and humidity levels underneath it.  On the lower right you will find an icon for alerts which will bring you to a gallery of alerts which will list time and date when a motion or door/window sensor was activated…along with corresponding video clips.

You can tap on the main tile to get live video feeds or any of the alert tiles to view the video capture. 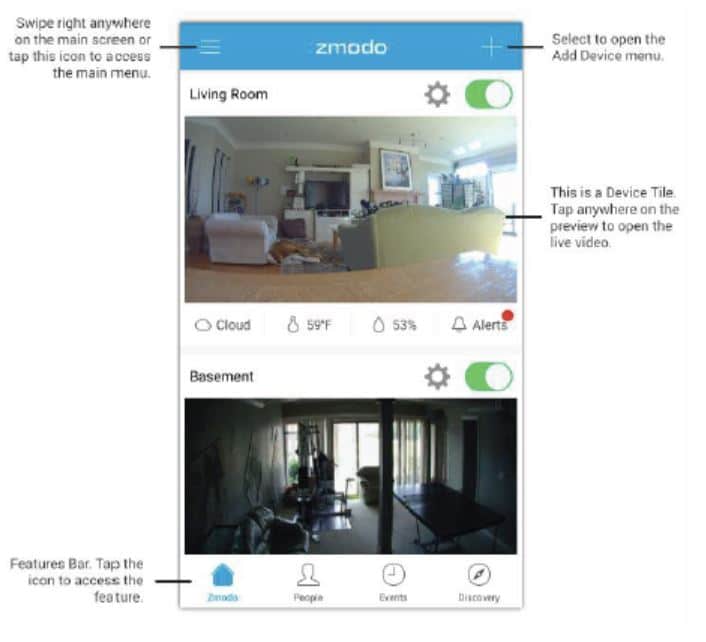 You can expand the live tile to get a full horizontal mode and take advantage of the 4x digital zoom and by using standard touchscreen finger gestures …and pan the camera view by using left (<) and right (>)arrows on the screen.

There are controls that run along  the bottom banner for taking manual pictures and video clips and switching between standard (LD) and High Definition (HD) modes….as well as a control to turn audio on/off.  In vertical mode, just depress the microphone icon and you can speak through the system, as well.

The Zmodo app is straight forward, user-friendly and very intuitive…and the user manual is concise and well written- in plain English.

To get into the settings, just tap on the “gear” icon in the top right hand corner, and it will pull up the Device Settings menu. Here you can toggle on/off a number of settings, access set up functions, create camera and notification schedules and view temperature and humidity graphs. 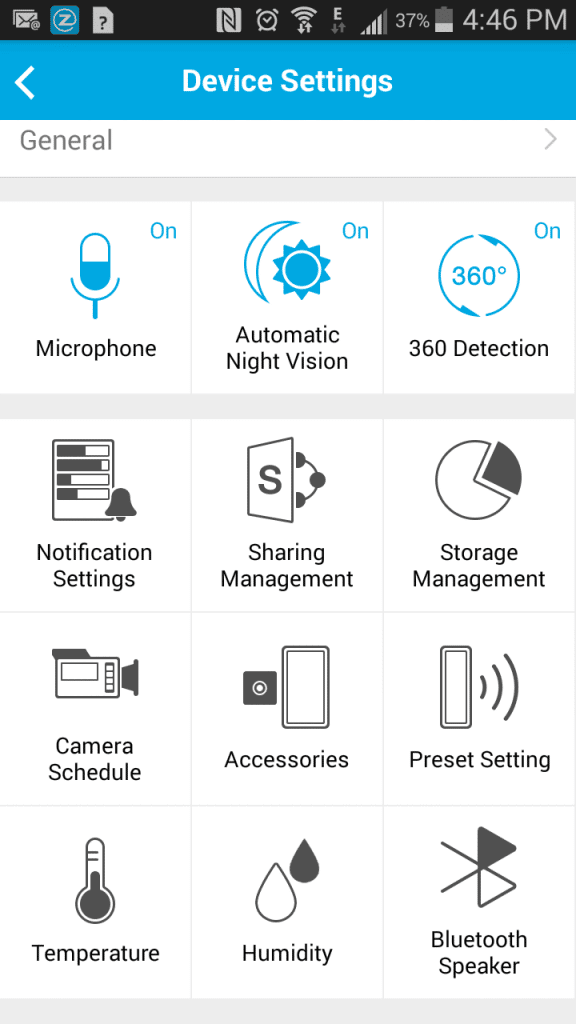 Let’s face it….there are tons of good Hi Def security cameras out there…but, what separates the Zmodo Pivot from  the Drop Cam, Canary, Piper , Nest etc.  is the fact that Zmodo delivers a 360° field of vision.

Strategically located, the Pivot eliminates the need for multiple cameras to cover an area, and detects  motion  anywhere in the room –triggering a notification and video capture and using proprietary algorithms to determine whether to rotate the field of vision or remain stationary.

And when it comes to the quality of the video…the Pivot doesn’t disappoint.  It delivers 135° of  crystal clear 1080 P High Def video with 4x Zoom capability. 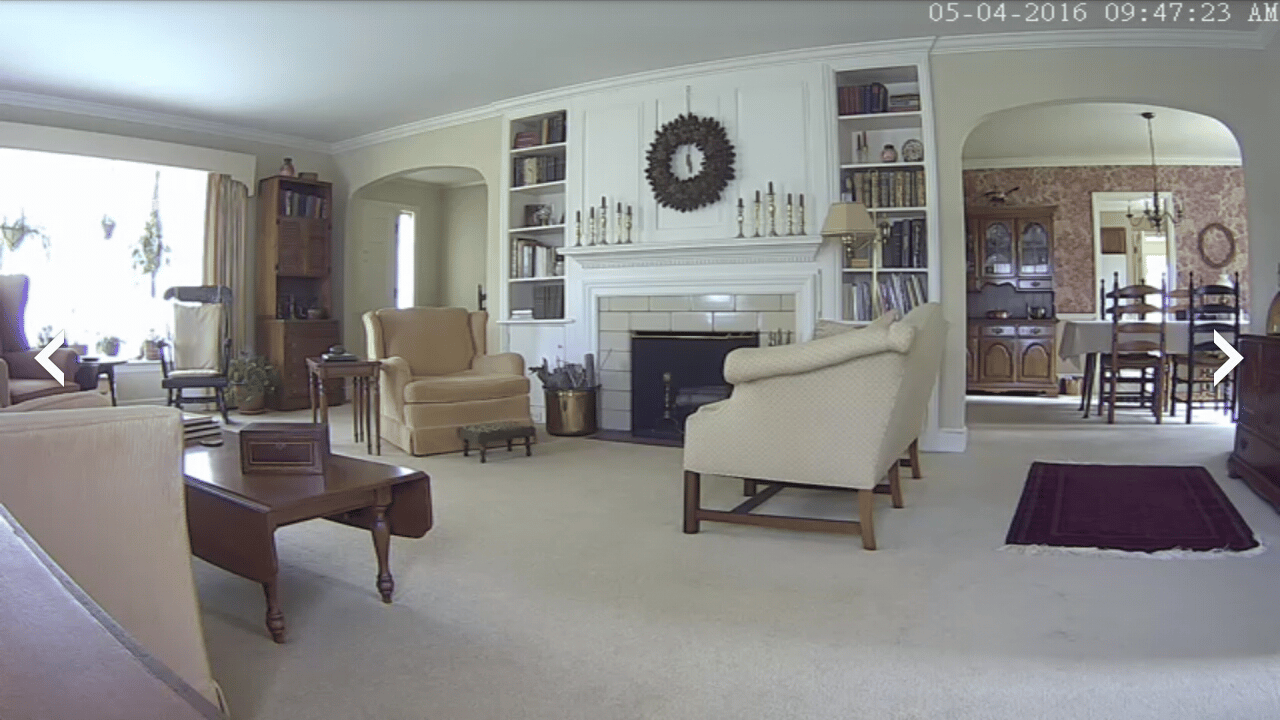 ….and when the lights go down…the IR takes over to provide very effective night vision capability. 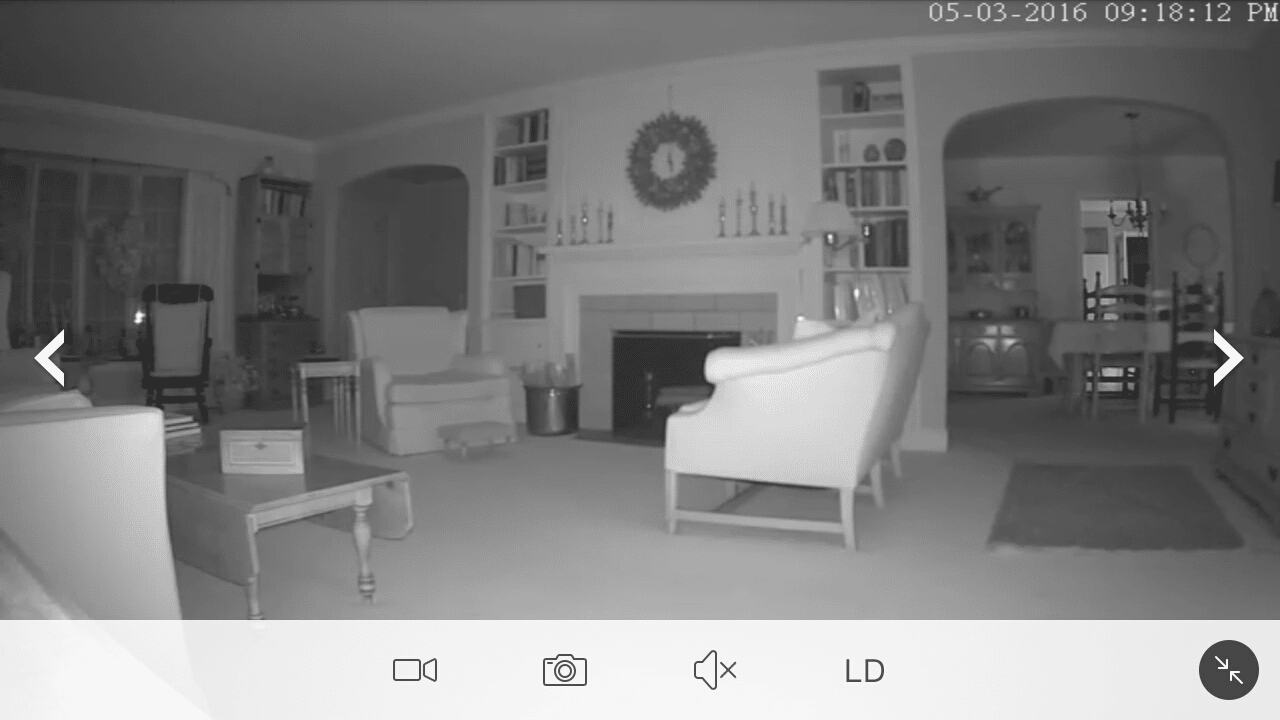 When it detects motion or a sensor is opened or closed- the system will send notification alerts which are virtually real time.  The Zmodo app  also has a handy scheduling feature that enables you to disable notifications when you are typically home.

You can even program the pivot to swivel to a predesignated position to capture activity when a door or window sensor is activated.  This is accomplished by enabling a “Preset Setting” that is triggered by an open sensor.  The system will immediately send an alert…and the Pivot will rotate for an optimal viewing angle that you have programmed. Set up was a breeze…and it worked flawlessly. 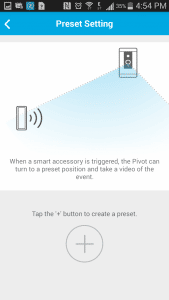 2 Way Audio on the Zmodo Camera

Whether it be for security purposes or just to keep Fido and the kids in line, being able to communicate directly is a big plus.

Keeping pets off that suede leather couch while you are at work is just one more application for this multi-functional video  device.  And when at home…it literally functions as an intercom system where I could be at one end of the house watching the ballgame, and speak with family members at the other end of the house without missing a play!

The Pivot – a Zmodo Security Camera with a  Bluetooth Speaker

A high end audiophile  device it is not, but the Bluetooth syncs effortlessly…and provides reasonably good audio through the 32 dB speaker on the bottom. 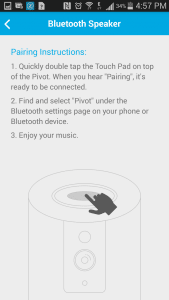 Temperature and Humidity on a Zmodo Camera? Yup.

While it can’t do anything to control the temperature and humidity, it can keep you apprised of any significant changes so that you can take appropriate  measures. And the Pivot keeps a running record so that you can track environmental changes. 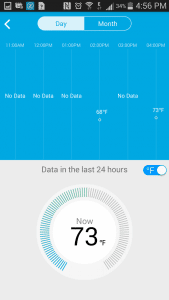 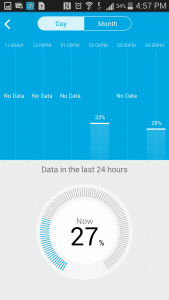 The Pivot is designed not only as a centralized security hub….but a social hub as well.

It can be networked and interfaced with a variety of sensors while providing high-definition video and interactive audio that can serve social functions…as well as security.

It can capture the moments of everyday life and easily share them and provide instant notifications and allow members of your social “family”  to respond and interact. You can easily share the camera and manage content and permissions through the Zmodo app. 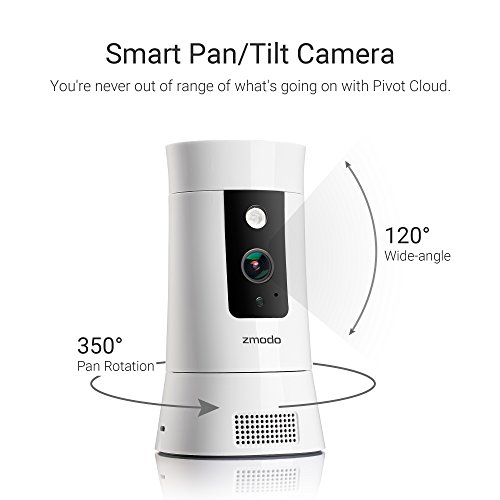 Zmodo set out to fill the need for a quality IP Security Camera that is packed with features – at a reasonable price.

I have to admit that, although the initial specs and the feature list were impressive….I was somewhat apprehensive that the final product would live up to the advanced billing.

Shame on me for being so skeptical.

While it is not a replacement for comprehensive security and home automation system…the Zmodo Pivot hit the ball out of the park with this device.

It exceeded my expectations in almost every way.  I was impressed in both the day and (especially) the night vision video reproduction. It was super easy to set up. The app was user-friendly and worked flawlessly.

How they could package a quality Hi-Def camera, 360° of motion detection and rotation, 2 sensors with sensor triggered rotation response, scheduling capabilities, 2-way voice capability, a Bluetooth speaker, environmental sensors and 16GB of internal storage into one slick package….for less than $200 is an amazing feat!

Whether you intend to use it as a stand-alone device or combine it with your Frontpoint, Protect America or ADT security system….The Zmodo Pivot packs some serious PUNCH!

Get the latest model of Zmodo Pivot at Amazon for under $60! 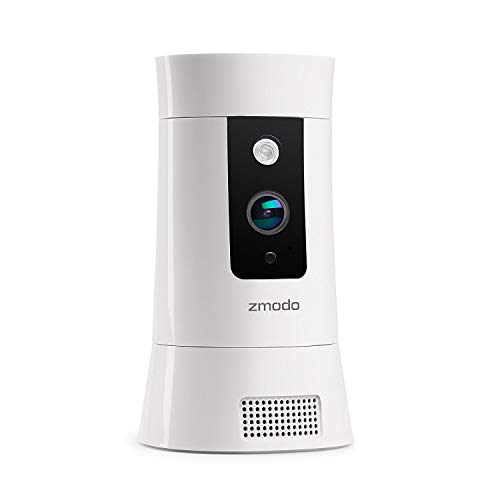 Prices pulled from the Amazon Product Advertising API on:

Product prices and availability are accurate as of the date/time indicated and are subject to change. Any price and availability information displayed on [relevant Amazon Site(s), as applicable] at the time of purchase will apply to the purchase of this product.

Thank you for visiting.  Please feel free to share or leave comments on this Zmodo Camera Review of the Zmodo Pivot.

Your browser does not support images upload. Please choose a modern one

What people say... Leave your rating
Order by:

Be the first to leave a review.

Last Updated on November 10, 2021 by The Home Security Advisor